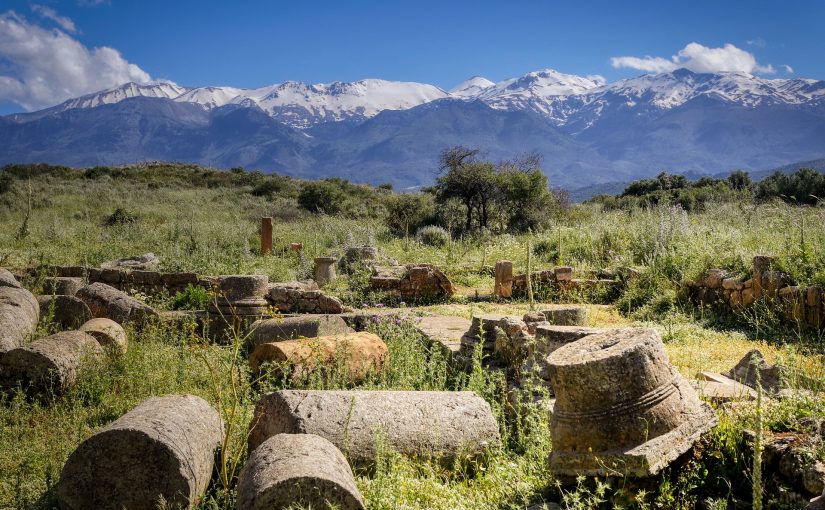 Disguised as dockers, two men darted across the no-go zone around the harbour and cut their way through the wire. They slipped onto the quayside, where enemy patrol boats bobbed in the dark. Their rucksacks were heavy with limpet mines. Searchlights swept the area. They wondered which ship to blow.

I put down my book and glance at the harbour, twinkling in the dusk below our rooftop terrace. My son Ben asks, ‘Did that happen down there?’ I nod. The quay is a curve of ancient stones guarded by a medieval castle. These days it is filled with yachts.

The British major and the Cretan partisan crept towards the silent boats, but a German searchlight picked them out. They turned and ran – back to the alleys of the city and then to the mountains rising behind Iraklion, where they lived in caves for most of World War II.

“Epic fail,” Ben grins and wanders back into our hotel suite. At the age of 11, he’s just as interested in its jacuzzi bath, gold bedspreads and room-service mezze as he is in history. But then he turns on the TV news and shouts, “The North Koreans have launched two warships with missile defence systems!” I say, “You’re watching history in the making.” He looks across. “Dad,” he intones, “if they launch a missile, history will be over.”

We talk like this because I’ve brought my two children to the island of Crete to experience history face-to-face, to take it out of their classrooms and chase its ghosts back to life. It’s a foolishly educational mission, but this is the perfect place. Crete has more history than it needs, stretching back to the very first cities in Europe, and including invasions by Romans, Byzantines, Arabs, Venetians, Turks, Italians and Germans. Usefully for a family trip, it’s also got sandy beaches and simple cuisine.

Next morning we set off for the highlight of Cretan history: Knossos, oldest palace in Europe and legendary home of the minotaur. It’s a 20-minute drive from the concrete tenements of a modern Greek city to the scattered rubble of an ancient one. Knossos today is a green hillside among olive trees. The kids skip up the entrance steps. They were raised on Greek myths and want to find the Labyrinth.

The steps lead to a courtyard edged with stone rooms and two-storey buildings. Once this was the ceremonial court of a Minoan palace, possibly where the famous bull-jumping rituals took place. Today it is a shadeless ruin with everything of interest roped off and inaccessible. I came here 30 years ago and you could wander through royal apartments and down grand staircases to underground suites with frescoed walls, where the world of 2000 BC came vividly to life. No longer. So many people visit that it has to be protected. The children spend an hour peering through glassed-off doorways, while I bore my wife with how great it used to be. Then we leave.

Mercifully Ben and Sarah did enjoy the Archaeological Museum which we had visited in Iraklion yesterday. Even more mercifully, it was being rebuilt, so only the finest of its 15,000 artefacts were on show. We spent a delightful afternoon among statues and frescoes of ancient warriors, mighty bulls, Minoan houses and snake goddesses. These were the finds brought back from Knossos. Ten-year-old Sarah deciphered pictograms on a clay disc from 1600 BC: “There’s a cookie, a fish, a guy with a Mohican…” And Ben was amazed by a pair of “epic” axes. “I don’t really like art museums,” he explained. “But this one is about things that happened and how people lived. It’s the coolest art I’ve ever seen.”

Now, leaving Knossos in a cloud of dust, we drive to a place that may impress them more. Somewhere up a winding road lined with vineyards we find the site of a daring adventure from World War II. We sit by the roadside and I tell them the story.

Just here the British major, Patrick Leigh Fermor, and his Cretan partisans kidnapped the general in charge of the German occupation. They waved down his staff car disguised as German soldiers and demanded to see his papers. As he fumbled they pulled him out, tied him up and hid him in the back. Leigh Fermor put on his hat and they drove the car into heavily guarded Iraklion, saluting at checkpoints and heading for the road to the mountains.

For 19 days they trekked across the high passes, hiding in caves and shepherd’s huts, moving Kreipe across the island, dodging spotter planes and search parties. On a remote beach, a British boat spirited them away. As the ragged group climbed aboard, they were offered the comforts of Blighty: lobster sandwiches and Navy rum.

The children smile politely. But for the rest of the afternoon, they loll in the back of the car taking military salutes. Whenever we park, they leap out and bark “Show me your papers!”

The first time this happens is when we stop for lunch at Margarites. It’s a one-street village of whitewashed houses teetering up a hill. But almost every house is a pottery shop or studio. Since history began, this has been a village of potters – its very name comes from ‘margara’, which means ‘ceramics’.

“This is a holy place for pottery on Crete, there is no place like it,” says George Dalamvelas, bending over the potter’s wheel in his shop, Keramikos. “We think potters supplied the ruined city on the hill, in the eighth century BC. I still make some neolithic styles of pot.” And he shows us cups, pourers and shakers in red clay, shaped in ancient styles. He digs the clay himself, from the mountainside. His shop is a huge stone room with brightly glazed ceramics and bowls of lemons and walnuts from his garden. His children wander through and smile at ours. Sarah watches him work. “In this village,” George says, “there are six potters still making pithoi – the huge storage jars you see at Knossos. People like them for their gardens.”

We look for pithoi makers but find none among the medieval doorways and ancient chapels of the village. So we drive slowly home to the villa where we are staying, on the western end of Crete. On the way we pass the dramatic skyline of Mount Ida, where Zeus was born in a cave and raised among goats on the hills. As we cruise past the tourist resorts of the northern coast, we swap Greek myths out loud. Ben’s favourite is about Zeus’s father Kronos, son of the sky god and earth mother, who ate all his children in fear that they would rebel against him: all, that is, except Zeus himself, hidden in a cave on Crete.

History lessons over for now, we retreat to the Villa Zoneras in the foothills of the White Mountains. We can see their snowy ridges from the garden, beyond a rolling landscape of olive groves and white farms among rippling grasses and yellow flowers. The villa is new but the set-up is traditional: a handsome house of cream stones, red tiles and green shutters, surrounded by palm trees and pines. Inside, it is actually Middle Eastern in style: a great stone arch divides the ground floor in two, a curving fireplace fills one corner. I have seen such rooms in Jordan.

But I don’t bother the kids with that. For now they can splash in the villa’s pool pretending to be ninja turtles. We adults cook chicken legs in thyme from the hills and sample the local hooch – a bottle of ice-cold raki, left in our fridge by the owners, who make it themselves. Elsewhere in Greece you sip ouzo, but on Crete the drink is the same as you find in Turkey. As night draws in, we build a crackling fire and Ben settles down to play tavli, or backgammon. Sarah clicks the yellow worry beads she bought from a stall in Iraklion. The guys groan only a little when I say that all these things are left over from the days when Crete was part of the Ottoman Turkish empire. We could be a mountain family 200 years ago. Ben laughs, “Apart from the pool and the fridge.”

At night the stars are like sparks in the clear mountain air. We try to name them and my wife finds a star-gazing app on her phone. She points it at a patch of sky and it traces constellations between the planets: Sagittarius the centaur, Orion the hunter, Gemini the twins – ancient Greek legends through a modern-day lens.

It’s time to go into the mountains, the wild heart of the island. Early one morning we drive towards the peaks. The tarmac road dwindles to a twisting lane and climbs. The twists get sharper, the drops more dizzy. Herds of sheep and goats leap among twisted trees and orange rocks. Their bells and the wind are the only sounds. We pass turnings and hamlets of half-ruined cottages that are not on our maps. Finally we are so lost that I knock on the doors of isolated houses, where guard dogs bark and owners eye me warily.

Our destination is the village of Xiliomoudou, said to have Crete’s loveliest church. By sheer chance we find it. At the summit is the Taverna Lemonia, a wooden chalet with views over valleys and crags and distant white villages. Way below is a tiny Byzantine chapel, Ayios Nikolaos, the one we’ve come to see.The key to the church is kept by a woman in the next village and while Leonidas the taverna owner phones her, we chat to Charlotte, the Dutch waitress. “In this village they live like 200 years ago,” she smiles. “Come and see.” And outside in the yard she shows us Leonidas’ world. There’s a shed where he makes olive oil, turning the millstones with the help of a donkey. Beside it is a trough where the villagers tread grapes to make wine: and a still where the skins are fermented into raki. Across the yard is a windmill where Leonidas grinds flour, and a workshop where he makes traditional musical instruments. He’s hammering away as we wander in, a big man with a mane of white hair, grinning and speaking no English. In this place, history has no end. The children are entranced. As William Faulkner once wrote, “The past is never dead. It’s not even past.”

We drive down to the church. It’s a tiny building of pink bricks and lancet windows, surrounded by trees full of oranges. Their scent follows us inside, where walls of deepest blue are painted with mysterious frescoes dark with age – saints and scrolls and cities, with the rich reds and golden haloes of medieval icons. A single candle burns in a brass holder, as other candles have done here for 700 years.

I walk out to the sunshine and the rushing of wind in the leaves. Ben and Sarah are playing tag. The keyholder is waiting, an old lady in black. We smile and chat. Her son, she says, has lost his job in the recession affecting Greece. People have moved back from cities to villages. It is history, changing the world again. I offer her a fee for showing us around, but she proudly refuses. As we walk towards our car, she hands my wife a gift: a shining spray of orange blossom, fresh from the ancient trees.