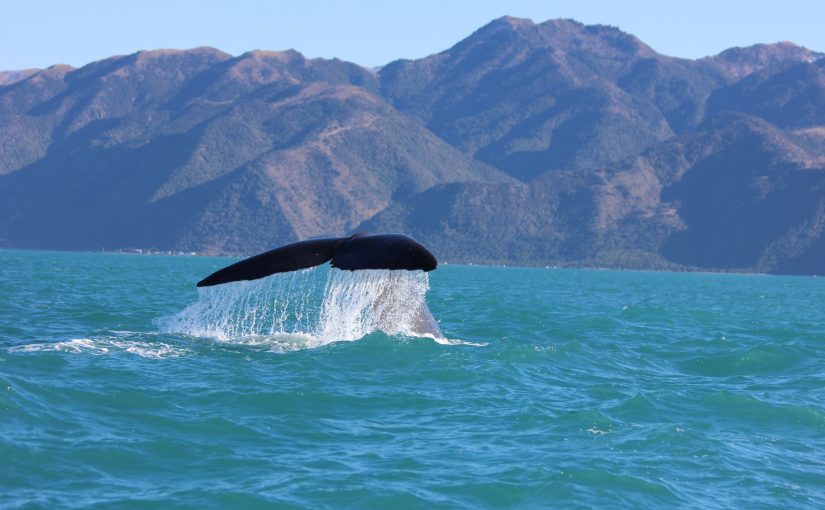 As darkness fell on the olive trees and the grazing deer, I slipped into the jacuzzi in my treehouse and listened to the Pacific breakers rolling in. My muscles ached from swimming with 400 dolphins beyond that surf, and my head swam from sampling almost as many wines at the vineyard outside town. I was looking forward to a dinner of drippingly fresh crayfish, then an evening by the fire that flickered at the far end of this treehouse room. Beyond it, huge windows revealed a zigzag of blue mountains. A stag bellowed to a doe. Beside the fire, an ipod rippled jazz. I slid deeper into the scented water. Was this, I wondered idly, the world’s finest place to get close to the wild?

Kaikoura is not a name that trips off the tongue when you list those lucky places in the world that offer a taste of adventure, an encounter with nature, and a touch of luxury at the end of an action-packed day. But this township of wooden cabins, ringed by mountains in a rugged bay, is New Zealand’s next big eco-destination.

“It’s the best place in the world for swimming with dolphins,” explains Kate Baxter, the sparky concierge at Hapuku Lodge, who shows me up the rickety stairs to my treehouse. “And seeing whales. But mind you read the weather report at breakfast.” She grins. “If the sea’s rough, you might need a Kaikoura Cracker. They’re the only pill that works.”

Kaikoura has two great claims to fame. One is Hapuku – a line of treehouses perched in a grove of wispy manuka trees, between the mountains and the sea. From the outside it’s a tumble of timber boxes on stilts, but inside it’s a cool expanse of slate flooring, designer furniture and satin drapes. Its restaurant is superb, with a chef flown in from San Francisco, and its management is keen to be green. It has been called the world’s most romantic honeymoon hotel.

The other great claim lies beneath the sea. Below those heaving waves is the Kaikoura trench – a Grand Canyon of the ocean, 60 kilometres long and 1,200 metres deep, whose rich food chain attracts giant squid and 14 species of dolphin and whale. Nowhere else in the world has such deep water a kilometre from land. Here your chances of seeing a whale are 95%, every day of the year.

Next morning I’m ready for the sea. Dutifully I search the breakfast room for that weather report. It’s a handwritten note among trays of fresh-baked scones and jars of home-made jams. ‘Rough seas warning.’ Should I be worried by this?

But I don’t need much persuading from Stefan, the crisp-shirted waiter, to try the Lodge’s signature breakfast dish: Duck Hash, a crisp tangle of fried duck strips, softened with sautéed potatoes and drizzled with the yolk of a poached egg. It is meltingly good.

As is my stomach when I hit the water an hour later, somewhere out to sea, intent on catching the best experience this coastline has to offer: a swim among dolphins. They’re everywhere. Our speedboat is surrounded by hundreds – leaping, diving, double-flipping, their black fins slicing the water, splashing in curious circles around us, somersaulting in water and air in a vast display of playfulness and trust.

I sit on the back step of the launch, clad from head to toe in rubber, madly adjusting my diving mask. “You have too many smile lines,” warns the instructor from Dolphin Encounter. “They’ll let the water in.” Then I leap into the wake behind the boat.

There’s a shock of cold water and a heave of ocean swell, even though we’re well within sight of the mountains, not half a mile from shore. But out here the waters stretch to the South Pole, and wide-winged albatross skim low over the waves. The water tips and slumps like a vast creature breathing. Luckily I have taken a Cracker.

Then I look down. Below me, far into the green depths, are shadow after shadow of dusky dolphins. They weave and dive through soft jade light. One curves towards me, then darts away. Another circles my head. I float face down, peering into the world where they live.

We make three dives like this – the maximum the instructor allows. “We don’t want to disturb them,” he says. But three is enough. On the third, as I float marvelling, a single dolphin of my own length appears beside me. It stays close. I see its head turning towards me, peering into my face. Then I hear the crackle of its voice.

I am entranced. It’s a feeling that returns next day, out to sea once more, this time in search of whales. Today’s skipper is a tousled Maori who’s tracking them down with a sonar. Whenever it blips, he guns the catamaran to top speed. “They only come up for five minutes,” a crewman shouts above the roar, “then they dive for hours. Their tail flip makes 500 horsepower – enough to dive a thousand feet in a couple of minutes. Last year a research submarine took two hours to do that.”

We race for a mile, banging into headwaves, and I realise I have no Crackers. But then skipper cuts the engine and we tumble out on deck. Spray whips our faces. The boat rolls. My stomach steadies. The crewman points.

Between billowing swells, we glimpse a fountain of water and the long dark block of a sperm whale’s head. “That’s just the front of its body,” he murmurs, “then there’s the tail. They grow to 18 metres long.”

It lurks in the water, still as a rock. Then tips up its head for one last fill of air and plunges into the deep. Its black trunk, gnarled with barnacles, surges upwards and then down, ending in the perfect arc of its tail, the twin flukes flicking skywards and under. A circle of bubbles floats on the water.

This is the first of four whales we see this afternoon. They’re all sperm whales, but others are found here too – humpbacks, orcas, blue whales, all pausing to refuel in the trench, en route from the Antarctic to the tropics. The size of these creatures is staggering. You could swim in the artery of a blue whale. Its heart is the size of a small car.

Whales rarely come so close to shore. That’s what first attracted Europeans, and their earliest settlement here was the Waiopuka Whaling Station in 1842. Its original building still stands, a clapboard bungalow on a lonely point. Now a museum, Fyffe House sits in a cottage garden of pink and white flowers. But when you reach its wide verandah, you see the foundations of the house are the bones of whales. Huge discs of vertebrae, wide as your shoulders and grey with age, sit between the wooden walls and the beaten earth. This town was built on whales.

But today the hunt is for thrills not kills, and Whale Watch Kaikoura, the leading tour operator, is keen on conservation. “We came up with the rules for watching whales,” explains Lisa Bond, a feisty ex-skipper, in a shoreside office crammed with awards. Their boats are environmentally designed, they limit the density of marine encounters, and their profits go to community projects. “The company was set up as a charitable trust by four Maori families, anxious to create jobs and keep the young people in town.” She smiles. “Now the young people do leave for university – but they always come back. We have a rugby team again.” And in 2009, Whale Watch were global winners of Virgin Holidays’ Responsible Tourism Award.

The town council has followed this lead, with an ambitious plan for a green future. In 2004 they became the first in the world to win a Green Globe certificate for environmental management. “Not bad for a little nowhere place,” grins council spokeswoman Ann Paterson, over a cup of tea on the art deco Esplanade. Then they set up a carbon-offsetting scheme called Trees For Travellers, and a festival of fashion from recycled materials. “Perhaps it’s because we’re so close to the sea,” she ponders. “Nature matters to us.”

But nature has always mattered here. Six centuries before the white men came, the Maoris arrived to fish its teeming waters. They named it for this abundance – Kai for ‘food’ and Koura for ‘crayfish’. In their legends, the trench was carved out by a god, and the first ancestor rode in on a Southern right whale. The god Maui fished up North Island from the deep, and where his foot slipped into the water, it made a splash that became the headland above the town.

You can walk up there today, wander the ramparts of earth that remain from the ancient village, and gaze across the sunlit waters. I went there with Maurice Manawatu, who runs the local Maori Tours. His sister welcomed us with a ritual song, walking backwards before us into the site. In a sacred spot surrounded by trees, Morris gave me a Maori name, enshrining a place back home that is special for me.

He pointed a finger at the white peaks behind the town. “My name is from a mountain over there, called Sacred Footsteps of the Rainbow God. For us Maori, people of the land, all of nature is sacred.”

It’s a view that the modern world is starting to share. And here in Kaikoura, you can experience it for real.