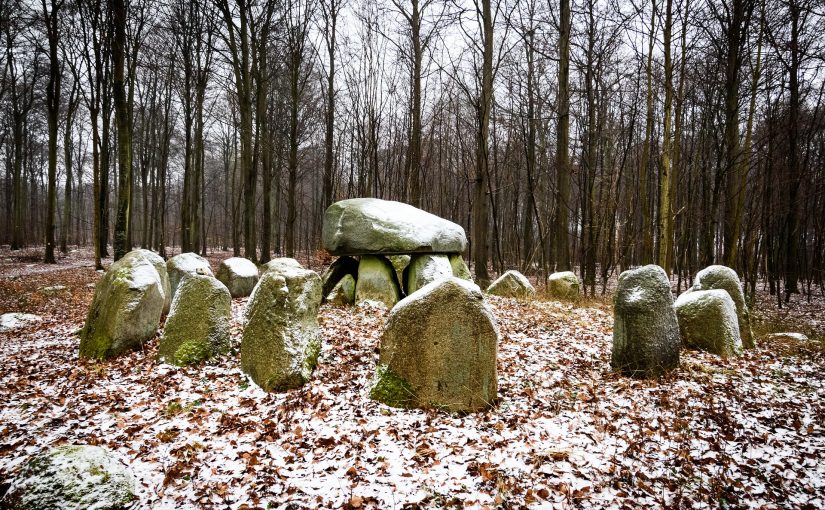 I’m driving through central Denmark in search of dead bodies.

Not the kind you find in Scandi Noir movies or washed up in Copenhagen in scary news reports, but an older kind from long ago that can tell us about our past and maybe who we are.

“They were buried with everyday objects and even dogs,” says Jasper Lynge, steward at Lindholm Hoje, the largest Viking burial ground in Europe, where I begin. “They had things you would recognise – knives, jewellery, dishes for food. But this was done a thousand years ago.”

We gaze across a windswept hill in northern Jutland where hundreds of stone circles still mark the graves of Dark Age people. Many are shaped like ovals – like boats – 20 feet long and marked at prow and stern with taller stones jutting from the grass like ancient timbers. Beyond them shimmers a jagged fjord where longships once launched for the North Sea and the lands of plunder – including, of course, the British Isles.

“And now, a Viking breakfast,” grins Jasper, leading me into a visitor centre with fine displays on Viking history. We sit at a table spread with Dark Age delicacies – slices of sweet spelt bread, a rough bowl of pickled gooseberries, rosemary jam “and a horn of mead wine,” he chortles. “These salted almonds came from Spain, where the Vikings traded. They sailed everywhere. In the graves we found a brooch with African ivory inlaid, a knife of Damascus steel and coins from Arab lands.”

These early freebooters, part merchants part pirates, spun a web of trading and raiding that spanned Europe and the north Atlantic. They reached Constantinople and Newfoundland, built Dublin, York and Novgorod, ruled Normandy, Sicily and Scotland. They left behind their genes and their place-names, the British royal family, and a particular form of corpse that would not look out of place in The Bridge. I say goodbye to Jasper and drive off to see one.

Aarhus, 70 miles south through waving cornfields and pretty wooden villages, is Denmark’s Oxford – a handsome university town by the sea, noted for its nightlife and its New Nordic restaurants. This year it is Europe’s Capital of Culture and its ambitious programme, directed by an expat Brit, asks what it means to be European – an interesting question in the era of Brexit. There have been avant-garde operas, community arts, Viking sagas and a Creativity World Forum. But the town is much more famous for a 1,900-year-old murder victim on show in its archaeology museum, who offers a different answer to that question.

Moesgaard Museum is a spectacular modern building by the shore. You can walk up its slanting roof for superb views of the silver waters that link the Baltic to the North Sea. Inside is a hall displaying the evolution of mankind, from apes to now, shown in sculptured faces of all the variant species: Sapiens comes in late. Beyond that is the resting place of a 30-year-old man who was killed near here in 200 AD by having his throat slit from ear to ear from behind.

Grauballe Man was discovered in 1952 by peat-cutters digging for fuel. He was so well preserved in the acid waters of the bog that they thought he was a recent death and called in the police. The authorities could still take his fingerprints.

I gaze into his face. His hair is red. His skin is soft and shiny. His head is twisted behind his back.

Bodies like this have been found all across northern Europe, from the marshes of Poland and Germany to the lowlands of Belgium and the bogs of England and Eire. They go back a long way, as far as 8000 BC, and their spread suggests a single culture across ancient, tribal Europe, long before the Vikings.

They are thought to be sacrifices, slipped into the waterworld between earth and underground where gods might be approached, perhaps in times of trouble. Beside Grauballe Man are displayed other offerings dropped into the holy waters – warriors’ swords, ritual cauldrons, plaits of women’s hair.

I wander through the dim-lit chambers, as though underground myself. The maze of the museum is a twilight zone of a distant past that is also mine, like a place from a dream whose symbols stay in your mind. My ancestors came from Scandinavia. My grandfather was a knight at the Swedish court. These people are my own. The borders between them and me are thin.

Forty years ago, in the last era when Ireland had a hard border and Europeans were being killed for religious reasons, a young Irish poet called Seamus Heaney wrote a suite of poems about this bog man and his compatriots. One begins: ‘Some day I will go to Aarhus/To see his peat brown head,/The mild pods of his eye-lids,/His pointed skin cap….’

The suite became famous as the core of a book called North, which identified the old cultures of the North Sea as a single zone, whose buried meanings affect us still. For Heaney was writing in the time of the Troubles in Ireland, when historic identities bred violence on a scale way beyond Scandi thrillers. His poem ends: ‘Out there in Jutland/ In the old man-killing parishes/I will feel lost,/ Unhappy and at home.’

But in a classic case of mistaken identity, Heaney got the wrong corpse. I drive on to the town of Silkeborg to see the truth. It’s a handsome place on a lake where boats splash and the police are polite at my driving errors. In the hall of its local museum I meet curator Karen Boe.

“Oh yes,” she smiles, “I met Heaney. I even got drunk with him. He helped us a lot, because he wanted to make up for this.” Heaney’s bog body, she explains, was not the one at Aarhus but the one on show here in Silkeborg: Tollund Man. “But he said that Aarhus fitted better in the poem, so he owed us a syllable.”

She shows me the body on a slab. It is scary. The dead man is naked but for a leather cap and belt, curled as though asleep or afraid. And round his neck is a noose.

“Hanging was a sacred death,” says Karen. “In Norse mythology, Odin was the head god and he sacrificed himself by hanging on a sacred tree. Perhaps this man was a messenger to the gods.”

I end my journey at a final resting place, where Dark Age beliefs merged with Christianity. Forty miles south, in the heart of the country, is a village called Jelling. I park and walk to its whitewashed medieval church. Beside it rise two burial mounds, the tombs of the first king and queen of Denmark. In front is the Jelling Stone, a 10-ton slice of granite erected by their son, Harald Bluetooth. It’s popularly known as ‘Denmark’s birth certificate’.

I peer at its carved sides. One is chiselled with Viking runes boasting of Bluetooth’s conquests and how he converted ‘Danmark’ to Christianity. The other has a carving of a crucified god, tangled among branches. But it is not Odin: it is Jesus, the earliest image of Christ in all of Scandinavia.

A similar carving of Christ among branches has been found on a grave in St Paul’s Cathedral in London. It dates from the eleventh century, the period when Vikings occupied England under William the Conqueror – and never left again.