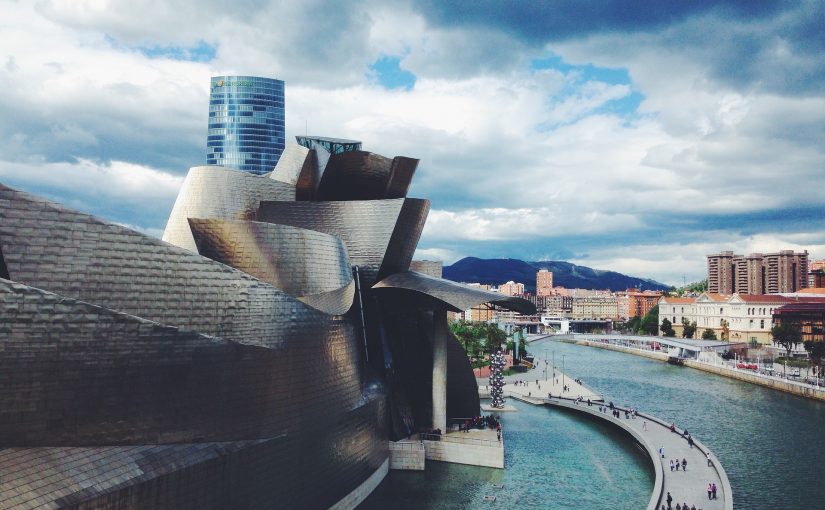 Michelin-starred chef Josean Alija leans across the kitchen counter and points at a plate of cod skins fried in oil. “This food is our culture,” he growls, “our identity, our place.”

I smile and try one. It’s a Basque version of a prawn cracker, fresh off the boats and sharp with the sea. Then he shows me to a table in his minimalist, modernist dining room and I begin an astonishing supper of reinvented Basque cuisine, from oysters in lemongrass sauce to hake with chrysanthemum leaves, ending with an ice cream made from sheep’s milk curd.

Over a final glass of Rioja Alta, I gaze out of the window at a sci-fi scene beyond – the riverfront of Bilbao, lined with modern apartments and high-arched bridges, curving away into a future of white concrete and mirror glass.

Josean’s restaurant, Nerua, is tucked inside the titanium folds of the Guggenheim Museum, and it’s part of the vision that has transformed this decaying industrial port into a tourist destination. Twenty years ago Bilbao adopted a masterplan for renewal, based around its river. So next morning I take a stroll by the water with a Bilbaino called Santiago.

He shows me the old shipbuilding yards, now a ship-shaped convention centre, the birds-wing bridge designed by Calatrava and the 40-storey tower of Spain’s largest energy company. A jetski whizzes past a giant spider sculpture outside the museum, where tourists pose for selfies.

“Twenty years ago,” says Santiago, “you didn’t come to Bilboa unless you were lost. Where we are walking was iron foundries and factories. Then they brought in the architects: Cesar Pelli for the waterfront, Norman Foster for the metro and Frank Gehry for the museum. Now everyone knows Bilbao.”

But it’s not all hi-tech in this ancient capital of the Basque country. Round a bend of the river is the old town, a crumbling grid of gothic alleys lined with cafes and boutiques. At one end is the revamped food market, where stalls are stacked with fish and fungi and plates of tempting snacks. In a pretty square of parasolled cafes is the cathedral of Saint James, named in the days when pilgrims to Compostella stopped off here.

In a back alley we pause outside a scruffy bar. “This used to be an ETA place,” warns Santiago, referring to the violent Basque separatist group, who only announced a ceasefire in 2011. “This bar posted photos of ETA activists on its walls,” he murmurs. “Six or seven years ago, you would not go in.”

I go in. It’s a grubby place with beer barrels along one wall and wilting sandwiches on the zinc. But pasted on a pillar, among the tattered postcards for local nightclubs, I find one about Basque prisoners tortured by police, and near it a photo of a man in khaki uniform and balaclava. Clearly a darker past is still present here.

Back out in the sunshine we head for the old town square, called of course the Plaza Nueva. It’s one of the loveliest in Spain, its neo-classical arcades packed with handsome shops and vibrant bars. We step inside the Cafe Bar Bilbao to try another kind of Basque cuisine: pinxtos. They’re the local answer to the tapas of southern Spain, with a baguette base on which layers of flavours are piled up. Plates of them cover the counter in the pretty blue-tiled bar.

We try slices of salt cod under pil-pil sauce, blood sausage topped with caramelised onions, then anchovies heaped on green peppers known locally as ‘Gernikas’. The owner plonks down a bottle of cool Txakolina wine unasked and we retreat to a table outside. Above us on a wall of the square I spot a sign for The Royal Academy of the Basque Language.

The Basque people have been semi-independent throughout recorded history, going right back to Roman days. Centuries of conquerors have swept across their mountain lands but never stayed long enough or fought hard enough to subdue them. Even today, Basques pay taxes to their own regional government not to Madrid, and Spanish kings swear a special oath to respect their autonomy. In 1981 King Juan Carlos, like his predecessors, swore this oath beneath an ancient oak in the nearby town that has come to symbolise Basque identity, struggle and renewal: Gernika.

I drive there next day. The road curves through green hills dotted with the big square farmhouses favoured by the Basques. Many Basque surnames contain their word for a house – eche or etxea – echoing their roots in this rural world. I reach Gernika and park. It’s a modern little place, bustling with the Monday market where burly men in berets hawk cheeses, hams and fruit from their farms. But 82 years ago, during the Spanish civil war, it was set ablaze in the first annihilation of a civilian target by aeroplanes.

On April 26, 1937 – a busy market Monday like today – bomber planes sent by Adolf Hitler to General Franco swooped on this sleepy place. In a single day, 80 per cent of its houses were destroyed. Perhaps 1,200 people were killed. Many were machine-gunned by the planes as they ran away. Such a thing had never happened before, in all of human history.

The town had no military value. The air-raid was Hitler’s experiment in the new technology of aerial warfare. Before the Blitz and Dresden, before Hiroshima, long before Mosul or Aleppo, there was this. Later the fascists pretended the damage had been faked by local militias, a lie still peddled by belligerents in conflicts to this day.

One man who survived the event is Luis Iriondo Aurtenetxea – and I am going to see him.

“When the bombs starting falling, I was halfway up the market square,” he recalls, when we meet in the town’s evocative Peace Museum. “People pushed me inside a shelter. I was terrified of being buried alive. I was just 14.”

His blue eyes narrow as he recalls that day. “The bombing lasted more than three hours. The planes released their bombs, then returned to base to load up more. They crossed each other in the sky as they came and went. I started hundreds of times to say a prayer but I never could finish.”

He walks me to a corner of town that survived, the old open-air market square, where he sheltered in a tunnel. His haven is still there. We step inside its bare white arch, hardly taller than a man. “I couldn’t breathe in here,” he says, “it was so packed. The walls were running with humidity. The floor was wet with mud. The whole town was burning.”

It’s a terrifying vision, and one that Luis has spent decades recounting to the world. “The young people now,” he sighs, “this is just history to them. We survivors will disappear. But nowadays Gernika is called the Peace Town, and we have an office devoted to spreading reconciliation techniques. We want people to carry on with our message of peace.”

I thank him warmly and wander the rebuilt backstreets alone. On a wall by the church is a tiled replica of Pablo Picasso’s furious painting, Guernica, which alerted the world to the atrocity here. It became the most famous artwork of the twentieth century and a copy still hangs outside the UN Security Council as a warning for the world’s leaders. Before the fateful UN debate on the invasion of Iraq in 2003, a curtain was hung across its face. I hope that was for shame.

Picasso painted his huge protest in just six weeks in the summer of 1937. He swore then that he would never return to his native Spain while Franco was in charge. And he never did.

Franco reigned for 36 years, the last of Western Europe’s great dictators. Only in the 1980s did his country start to emerge from his legacy of violence, poverty and ignorance. People like Luis are part of this recovery.

Two blocks down from the mural is Picasso Street, named in thanks for the painter. It’s lively with cafes and I sit down to gather my thoughts. At the next table a family are eating lunch, the children giggling over fizzy drinks. They’re just like mine. I watch them messing about with straws and paper napkins and realise that these are the tiny joys of peace. There is a future as well as a past. Places can be reborn.

I catch the eye of a waiter and order one final pinxtos.