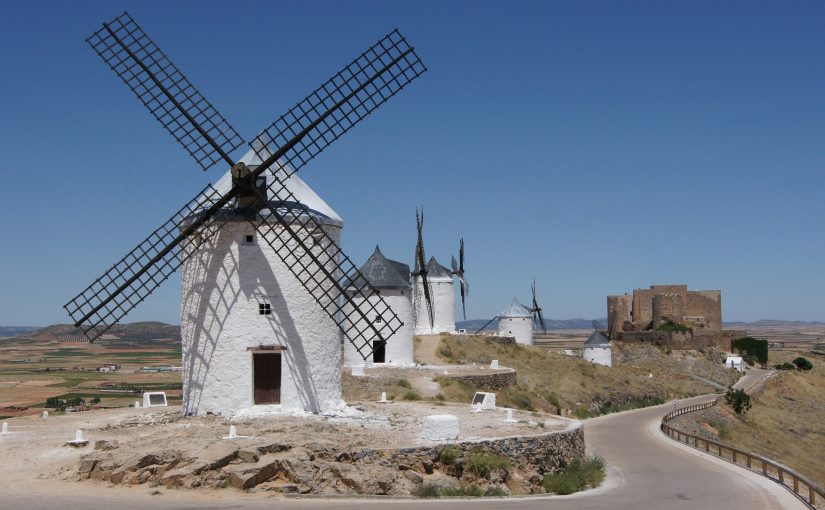 “From up here you can see all the windmills in La Mancha,” says Jose Perulero, peering from a windmill tower to the rust-red plain below, where nothing stirs among almond trees and olive groves and jumbled white villages dotted with mills. “This is the crossroads of Spain.”

Behind him the miller hauls a chain and sets the great sails spinning. Wooden cogwheels creak above a massive grindstone. Jose takes a pinch of flour and smiles. “These windmills were used until the 1950s. Now this is the only one in all of Spain that still works all year round.”

Jose is my guide to the seven mills that perch on a rocky ridge above Consuegra, a dusty hamlet 90 miles south of Madrid. Locals believe that these inspired the tale of Don Quixote jousting with windmills, the most famous episode in the most famous novel ever written. For Consuegra is the gateway to La Mancha, the unchanging flatlands where Quixote’s adventures were set. And I have come to find his ancient Spain four centuries after the death of his creator, Miguel de Cervantes, in 1616.

We walk past the mills to a ruined medieval castle. Inside its sandstone walls some local actors in velvet robes perform a scene from 1183. The King of Castile is granting the castle to a knight with a cross, who swears to defend it against the Moorish armies of Andalucia. It’s the world of chivalry from which Quixote sprang.

His fabulous quest is to revive the age of chivalry by taking to the road as a knight in search of wrongs to right and damsels to defend. Sadly he’s doing this in sixteenth-century La Mancha, with a barber’s bowl for a helmet and a nag for a steed. Everyone he meets decides he’s mad, especially when he mistakes everyday things for fierce challenges – a windmill for a giant, a flock of sheep for an army – with ludicrous results.

By contrast, his squire is a crude peasant on a donkey. Sancho Panza’s main concerns are food, doubloons and a bed for the night. Together they are the first great comic duo, the Basil and Manuel of Renaissance literature, with similar scope for doomed pride and chaotic confusion.

“Don Quixote is a wonderful loser,” explains Jose. “But he’s an idealist. The book tells us to keep trying for our dreams, no matter how we fall down. That’s why it’s universal. Cervantes is our Shakespeare.”

This brilliant tale may have evolved in a sleepy village north of here. I drive to Esquivias along dusty roads, spotting windmills. The village is a maze of whitewashed houses with iron balconies and red-tiled roofs. Its streets are named after characters from the book. In the Plaza de Cervantes is the house where Cervantes lived, after marrying a local girl in 1584.

The couple shared this house with her uncle, Don Alanso Quijada. Local legend suggests he was mad. ‘Quijada’ is an old family name of Quixote himself, whose first name is Alonso. It’s just possible that this much-loved character was built on an elaborate family joke.

Today their house is a museum of the time. There’s a dark kitchen with a fireplace full of cauldrons, bedrooms with four-posters and praying stools, whitewashed walls hung with armour and tapestries. Outside is a bodega with tall wine-jars and a wineskin of the kind so prized by Sancho Panza.

I drive out of the village past a little fountain whose tiles depict Quixote and Panza kneeling together, with a quotation from Cervantes’ biographer Luis Marin: ‘Without Esquivias, Don Quixote would not exist.”

Next stop is El Toboso, home to Quixote’s idealised lady, Dulcinea de El Toboso. It has another house museum, the Casa de Dulcinea, once lived in by a possible model for her. Dulcinea’s statue graces the medieval square, where I spot a strolling player doing scenes from the book. A crowd of locals roar with laughter as he mistakes a door for a windmill and charges it. He’s a fat Falstaff, sending up everything and everyone while falling on his face. The audience loves it, which may explain why this book has stayed in print since 1605.

I spend the night in a seventeenth-century farmer’s house, La Casa de la Torre. These days it’s a lovely hotel in period style, corridors cluttered with heavy furniture, dining room warmed by a massive fire. There’s a chess set based on the characters, and a display of editions in 67 languages, including Cantonese and Swahili.

Next morning I potter to Puerto Lapice, whose village inn is said to be where Quixote was knighted by an exasperated landlord and Sancho Panza was tossed in a blanket for failing to pay the bill. The Venta Del Qixote is actually a quaint reconstruction of a coaching inn of the day, with a corral for animals and wooden tables around a cobbled yard. Upstairs is an exhibition on Quixote, with reproductions of illustrations by artists such as Picasso, Dali and Cocteau.

Lunch is in Valdepenas, centre of a local industry that was famous even in Cervantes’ day: wine-making. Everywhere you drive south of Puerto Lapice is blanketed with vines. The oldest winery is the Bodegas Los Llanos – and Panza would have liked it here. Two enormous cellars cut from rock house rows of wine vats 20 feet high. The ground floor has an elegant restaurant of glass. I perch at a marble counter and taste the wines. The whites are straw-gold with notes of raisin or grapefruit. A red tastes of blackcurrants, perfect with slivers of the famous local cheese – Manchego.

Further on is a village where Cervantes was once imprisoned. Argamasilla de Alba is home to the Casa de Medrano, whose bare cellar is less hospitable than Los Llanos. It has a stone bench for a bed and a rough wooden writing table. Here Cervantes was held, perhaps for fiddling the books as a local tax collector. In the prologue to his novel he suggests that it was written in a prison. Might that have happened here? Local legend also claims that he met a mad nobleman in this village, Rodrigo de Pacheco…

Perhaps Spain in the declining years of its Golden Age was brimming with crazed aristos. Or maybe all of La Mancha wants to claim its most famous son. Somewhere past Argamasilla I find the Cave of Montesinos, claimed to be where Quixote met some long-dead knights underground. It’s really just a crack in the earth and it’s hard to match these locations. But its setting is the lovely lakes of Ruidera, which do feature in the book – as damsels turned into pools.

I head for the night to Almagro, a wealthy town in Cervantes’ day. Its winding streets are lined with noble palaces sporting coats of arms. Quixote would have loved all this. The main square is one of the prettiest in Spain, its sides lined with half-timbered houses on stone arches that hide tiny shops and cafes. On one side is the other reason to come – the Corral de Comedias, a sixteenth-century theatre unique in Spain, restored as it was in Cervantes’ time. He himself had tried his hand as a playwright in Madrid, though all but two of his scripts are lost. Inside, the Corral is like a theatre of Shakespeare’s day, which of course it is: an inn-yard with wooden galleries on three sides, a cramped stage on the fourth and nothing above but sky. I wonder what shows Cervantes watched here.

Curiously, Shakespeare and Cervantes died only days apart in 1616, and one may have influenced the other. There was a lost Shakespearean play called The History of Cardenio, based on an episode in Don Quixote where the shepherd Cardenio tells a tale of lovers betrayed and identities confused.

I retreat to the Parador de Almagro, a medieval convent turned elegant hotel. Its stone corridors wrap around Renaissance gardens of clipped hedges and gravel paths. Dinner in the lamp-lit restaurant includes suckling lamb that Panzo would have died for – and a bottle of ‘Don Quixote’ wine, a chocolaty red from nearby Manzanares.

Next day is Palm Sunday and I chug through villages preparing for Easter week. Palm branches and velvet banners hang from balconies. People gather in church porches. I stop at the handsome town of Villaneuva de los Infantes, where the House of the Knight of the Green Jacket is home to a character from the book. It’s a classic Spanish patio house, built around a central court with wooden balconies inside. The patio is scattered with wooden settles and rubber plants, where a maid is polishing candlesticks.

I check in at the sixteenth-century Morada de Juan de Vargas, a beautiful boutique hotel filled with modern art and stylish sofas on the Calle de Cervantes. Through a leaded window comes a distant sound of trumpets and drums. I skip outside to the Plaza Major with its medieval church and stone arcades. The sounds come nearer, accompanied now by marching, and into the ancient Plaza strides the Palm Sunday parade – a statue of Jesus on a donkey carried shoulder-high, a brass band thumping and a cohort of men in green robes with pointed hats like the Klu Klux Klan. Only their eyes can be seen through slits.

The procession circles the crowd in the square and my heart starts to beat with the drums. A bell in the church rings madly. Then the music stops and only the drums and marching can be heard in the silence. It is thrilling and terrifying. It is the old Spain, of church and state, of crusading faith, still here.

They wind past two steel statues, of Sancho Panza and Don Quixote leading their ridiculous mounts, and I realise why Cervantes’ delicious satire has endured for so long. It’s not only about human nature and the state of a nation: it’s about sending up the mighty so the ordinary folk can survive. It’s the revenge of the little lost villages of La Mancha on the kings and castles of their day. And it’s an essential story for us as much as them.